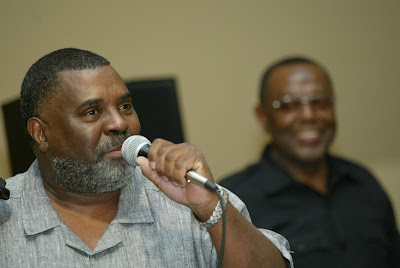 Toward North American African Statehood
The dream of a Black Nation carved out of the USA is a notion that may one day become a reality. It is no more a dream than was the state of Israel, the coming state of Palestine, the Southern Sudan and elsewhere.

North American Africans have a human right to self determination and sovereignty, especially we never exercised such since our sojourn in the wilderness of North America, and yet our condition deteriorates with each passing day, yes, despite a so called black President, after all, he hardly ever utters the word black, so we must dismiss him as a charade, a puppet created by the Wall Street Bankers and Global financiers to expedite their scheme of global hegemony with a black face since the majority of the world is non white. What better way to hoodwink and bamboozle the non-white global majority than with a black face white man?

He has had his opportunity to bring the change he promised, but it is simply more of the same, the same old white supremacy BS in disguise of something new and progressive, although his policies never approach anything progressive, they simply appear as such to those suffering the myopia of blackness, blinded by their emotions at the presence of a Negro in the White House. And yet this Negro capitulates (his favorite word is compromise) at every turn, even when it is unnecessary. We are well aware compromise is the nature of politics, but when compromise becomes capitulation and surrender, this is a useless exercise of politricks.

When was the last time this Negro mentioned a job program to relieve the 30 million unemployed? How long shall America remain the biggest prison house in the world, 2.4 million incarcerated at fifty to sixty thousand dollars per inmate per year? For juveniles it is $200,000 per inmate per year. Has he the brain power to imagine a general amnesty, after all he knows most of the incarcerated are being held unjustly due to a racist criminal justice system that discriminates at every turn.

Wars and rumors of wars. We thought things would change after the Bush era, but they've actually gotten worse: wars in Iraq, Afghanistan, Pakistan, Libya and elsewhere. Is this the change he promised? For sure, it's not the change we need, maybe his generals need it, maybe the military-corporate-university complex needs it.

And yet world events are moving rapidly to alter the status quo in the global village. Any thinking person can see it is only a matter of time before revolution reaches the shores of North America. Are any political leaders preparing the America people for radical change? Such change will of necessity alter the economic state, bringing a most needed redistribution of the wealth stolen by the blood suckers of the poor, the greedy corporate bosses and the Wall Street bankers who only fund both sides of the political spectrum, Democratic and Republican, who are essentially two sides of the same coin, a coin tossed about by lobbyists who care less about any- thing other than their benefactors.

With all the above, where shall we find ourselves in the endgame? We are without any plan derived from independent thinking, for our socalled leaders have little time for such since they are beholden to this political/economic masters, leaving them no time for critical thinking outside the box of pax Americana, hence our people exist in perpetual crisis, a crisis in leadership, critical thinking that is independent and radical since our situation is radical. With the dire economic situation in the hood comes crimes for survival, pathological acts of desperation when men and women have no vision, no solution other than to engage in self destructive behavior that only complicates an already sad situation.

If we could only retreat to a space for a breath of fresh air, we might be able to see a way out of this nothingness and dread. Instead, we run south, north, east and west, up and down the mountain in the manner of Sisyphus, never reaching the mountaintop Martin Luther King, Jr. claimed he accomplished. If Obama represents us at the mountaintop, I suggest we descend to the valley, for it is crystal clear to me the Democratic nor Republican party will decide our future in this land.

No, we need a body of men and women grounded in African and spiritual philosophy, yet with a clear political ideology and economic perspective that can direct our people into the future, that can derive plans for the next fifty to one hundred years. We need planners and thinkers astute enough to see into the future, to realize we must have national independence apart from the the United Snakes of America.

Any clear thinking person knows we shall continue existing in a hostile environment until we decide to make a space for ourselves wherein we can live in peace. White America has no intention to give up the privileges of White Supremacy culture. And why should we call upon them to do so? Let them revel in their whiteness but let us be about the business of construction our own society based on our reality and meta physicality.

In fifty years, you witnessed the state of Israel become a powerful entity, so why cannot you envision yourself doing a similar state formation? What prevents you from the adventure into statehood is fear and sloth, mental laziness and magnetic attraction to the world of make believe perpetuated by the Monkey Mind Media, along with white supremacy education and socialization that has addicted you to the Great White Way!

No wonder your children dismiss elders as fools, for what path have we charted for them, what road map have we provided except the capitulation and passivity of second class status? We convinced them to attend college, yet they return home brainwashed talking gibberish and acting out white supremacy mythology. The supreme irony is that for every one black male who attends college four go to prison. And it is no long term solution that our women attend colleges in high numbers, for as Dr. Wade Nobles says, the women are imprisoned in academia, suffering the mental atrophy of the classic colonial elite education, many graduating with gender identity problems of the most severe nature, partly the result of not being able to fulfill their natural biological need for a mate to procreate. Many of our college educated women, and our women in general, are no longer thinking about marriage, especially with a husband from the rapidly deteriorating pool of black males stable enough to sustain a marriage.

In short, our problem is not reparations, for we possess within our community wealth that makes us the 16th richest nation in the world. What we need is mental reparations, to answer the call of the self accusing spirit that tells us we are wrong to continue down this path of nothingness and dread, in full blown denial that we are navigating a perilous mental landscape that is a total break with reality.

The healing needed is quite simple, for as Dr. John Henrik Clark told us, what made us great throughout the eons and allowed us to achieve the foundations of world culture and civilization were unity and high morals.

When we get it in our heads that there is no other way, no half stepping, no quick fix, no Miller Lite solution, no voting, no jobs at slave wages, no criminality, none of this will suffix until we conjure the ineluctable energy to unite for the greater cause and do so in the spirit of righteousness, justice and peace.

The hour is upon us to seize the land, to claim what is due us for the centuries of free labor, for the kidnapping, rape and plunder of our Motherland, and ourselves, the mental trauma and post trauma we suffer at this hour, and yet if we continue in denial, like the drug addict, things shall only go from bad to worse. Seize the time!
--Marvin X,
Prime Minister of Poetry,
First Poet's Church of the Latter Day Egyptian Revisionists
4/24/11
www.firstpoetschurch.blogspot.com
www.blackbirdpressnews.blogspot.com
Posted by www.blackbirdpressnews.blogspot.com at 2:16 PM