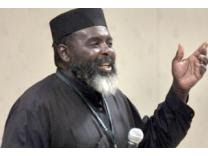 Imam Abdul Alim Musa, an African-American convert to Islam, is the head of the Masjid Al Islam mosque in Washington DC and founder of Sabiqun. He advocates for an Islamic revolution in the U.S. and promotes anti-Semitism. Despite his extremist views, Alim Musa is often invited to speak to Muslim student groups, in particular at events organized by the Muslim Student Union (MSU) at the University of California, Irvine.

These events often feature a handful of radical speakers who espouse anti-Semitic rhetoric, including Imam Mohammad al-Asi and Imam Amir Abdul Malik Ali. Though he claims that some of the major Muslim organizations try to avoid him because of his ideology, Alim Musa has participated at events organized by prominent Muslim-American community organizations including the Council on American-Islamic Relations, the Muslim Public Affairs Committee, Muslim American Society, Islamic Circle of North America and the Islamic Society of North America. He also makes regular appearances at the large annual conferences of the Muslim Congress, a Houston-based Shia community group.
At some of these events, Alim Musa has sold copies of an anti-Semitic book written by Imam Mohammad al-Asi. The book, The Ascendant Qur'an, blames Jews for conspiring against Islam.
Alim Musa has also spoken at mass antiwar rallies, including one of the largest pro-Palestinian rallies ever held in this country, which was organized by the ANSWER Coalition on April 20, 2002 in Washington, DC. Musa served as moderator.
In addition, Alim Musa is a founder and former member of the governing body of the Muslim Alliance in North America, a community organization that involves prominent American-born Muslims, mostly African-Americans. In 2004, the San Francisco Bay View described Alim Musa as "one of the highest-ranking Islamic leaders in the Black community, nationwide and specifically in the Islamic movement."
Born Clarence Reams in Arkansas, Alim Musa grew up in Oakland, California. According to his own account, as a young man in the 1960s in Oakland he was dealing with illegal drugs and later fled the country. He claims to have spent time in Algeria where he met fugitive activists in the Black Panther movement and to have also been involved in cocaine trade in Columbia. Alim Musa returned to the U.S. and was jailed in a federal prison in Leavenworth, Kansas, where he converted to Islam, based on his account.
Alim Musa is a "senior" member of the Institute of Contemporary Islamic Thought (ICIT), an international pro-Iranian, pro-Hezbollah Islamist think tank that distributes anti-Semitic propaganda in its magazine, Crescent International. He claims to have travelled several times to Iran, implying in various speeches that he has met with Hezbollah and Hamas representatives in Iran, as well as with groups fighting Indian forces in Kashmir during a visit to that region.

In addition, he maintains contacts with other extremist groups in the U.S. and abroad, including the anti-Semitic and racist New Black Panther Party (NBPP) and Jamaat al-Muslimeen.
Below is a sample of extremist and anti-Semitic statements that Alim Musa has made:
June 4, 2010: During a sermon at a Dallas mosque, Alim Musa argued that "the whole Western world is out against Islam" and that the U.S. government is implementing a policy that targets African-American Muslims because they are not as susceptible to intimidation as immigrant Muslims.

He argued that it was therefore the responsibility of African-American Muslims to establish an authentic "liberation-based" Islamic movement, which he describes as a "re-Africanization" and "de-Israelization of the Islamic movement in America."

January 5, 2010: Alim Musa appeared on Press TV, a state-funded Iranian TV news channel, to discuss the attempt to blow up an American airliner heading for Detroit on Christmas Day 2009. During his appearance, Musa claimed that the Israeli Mossad and the U.S. government were behind 90 percent of the terror attacks in the U.S. and abroad since the 1993 World Trade Center bombing, including the Christmas Day plot.