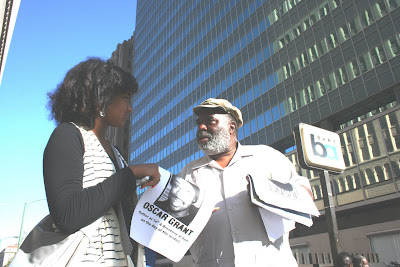 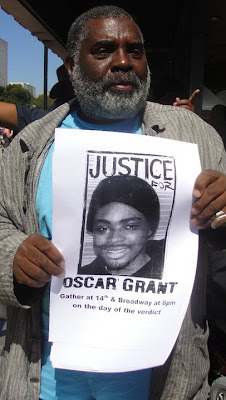 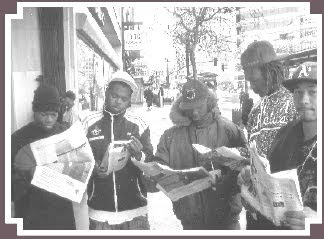 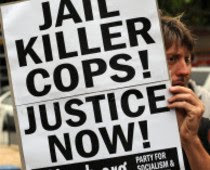 Oakland's Youth Rebellion at Academy of da Corner
Marvin X's (Plato Negro) Academy of da Corner is probably the most dangerous classroom in the world. It is located at the epic center of Oakland's crossroads, 14th and Broadway, downtown, across the street from City Hall and Frank Ogawa Plaza. The area is a frequent site for protest rallies and rebellion. Academy of da Corner was the location of Oscar Grant riots, when youth took over the area and other streets of Oakland to protest the murder trial and light sentencing of the BART police official who executed young Oscar Grant on New Year's Day. Youth who often stop at the Academy participated in the rallies and civil disturbance (who disturbed whom?) that followed the 2 year sentence given the officer for murder under the color of law.

A few doors from Plato Negro's Academy is the Footlocker that was looted, and next door is the law office of Attorney Walter Riley who was beaten by the Oakland Police as he tried to enter his office at the height of the civil unrest. The OPD didn't bother to stop the looters as they liberated some needed pairs of shows at Footlocker.

Yesterday as Marvin met students and writers at his academy, a march of youth from East Oakland ended in the middle of 14th and Broadway, closing down the intersection to protest a recent gang injunction that prohibits gang members from gathering and associating within a proscribed area. The injunction mainly affects black and Latino youth. The sit down in the middle of the intersection was mostly Latino youth from the Fruitvale Area, although they were accompanied by several movement folks. After their sit down in the middle of the street that stopped all traffic, they moved to City Hall for a rally that featured Angela Davis.

An Oakland Tribune reporter asked Marvin X what he thought about the gathering? He replied, "This is great, in harmony with events around the world that are shaking up the old order. I am honored to see the youth taking power over their lives. I am so happy to see they can do something other than walk around like ducks with pants sagging off their behinds. As per the gang injunction, it should be directed against the Oakland police gang, this is the gang that brings in drugs and guns. We know this is a common occurrence below the border, so why wouldn't we expect similar behavior by the OPD? They have a history of drug dealing, money laundering, shakedowns and false arrests, also planting false evidence. Who are the real gangsters? Oakland has a revolutionary tradition so I am elated to see youth in the tradition!" The reporter took notes and walked away. Nearby was a full contingent of OPD officers who accompanied the marchers from East Oakland and stood by patiently while they blocked traffic and proceeded to rally in front of City Hall.

Members of the Asian Pacific Islanders Youth Promoting Advocacy and Leadership protest at...

"We feel the injunction is a way to push us out of our communities," said Stephanie Olage, 17, a San Leandro High School student who came to Oakland to support the protest. "This is affecting our whole community, not just the gang members."

Oakland City Attorney John Russo has pushed hard to get the injunction, and next Wednesday a judge will decide whether to impose a preliminary version which would pave the way for a more robust order later on. If it passes, some 40 alleged Norteño members will have restrictions placed on their movements within the 400 square blocks of the Fruitvale district.

Carrying signs, shouting slogans and songs, the students joined a large group of adults on the steps of City Hall at 4 p.m. A succession of speakers then took the stage, saying the injunction unfairly targeted Latino youth, cast a criminal pall over the neighborhood and was a waste of tax dollars.

"Instead of an injunction, we want better after-school programs, better education facilities, things that will make a positive difference in the community," said Aurora Castellanos, 20, a junior at UC Berkeley who grew up in the Fruitvale neighborhood and believes the injunction could unfairly target her family, who migrated here from Mexico.

Michael Siegel, an attorney representing a coalition of interests that is opposing the injunction in court, also attended the rally as a "legal observer."

"Police just dismiss these guys as irretrievable, but to me, it's a policy choice," Siegel said. "Are you going to devote resources to incarceration or prevention?"

Siegel said the injunction is overbroad and vague, and could lead to abuse down the road.

"It could result in a lot of people being surveilled," he said. "My concern is that the police will err on the side of over-inclusion."

Protesters howled their support of the succession of speakers at the rally. Distrust of the police was a constant theme.

"The police are shooting us in the back," shouted Ruben Leal, one of the 40 young men on the injunction list, to wild applause and shouts of support from the crowd. "You think they're gonna make an exception for me?"

Leal was referring to the exceptions made for curfew violations in special circumstances like commuting to work, or emergencies.

The possibility of the injunction taking effect loomed large, however.

"We'll just have to get more people out on the streets," said Olage.

"I think it's a good thing," said Sgt. Arturo Bautiste, an Oakland policeman who patrols East Oakland. "The violence is out of control in part of the community. I think the injunction has a lot of community support."

Posted by www.blackbirdpressnews.blogspot.com at 9:53 AM