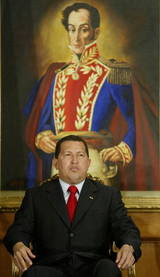 Toward a Definition of the
Bolivarian Revolution
Venezuelan President Hugo Chavez sits under a painting of Simon Bolivar on March 6, 2003, in Caracas.
(Photo by Kimberly White/Getty Images)

Question: What does Hugo Chavez mean by a Bolivarian Revolution?
Answer: Hugo Chavez came to power in Venezuela in 1998, and the following year a new constitution was adopted that replaced the country's 1961 constitution. This renamed the country the Bolivarian Republic of Venezuela, as an ode to Simon Bolivar, who is credited with the 19th century liberation of Venezuela, Colombia, Ecuador, Panama, Peru, and Bolivia from Spanish colonial rule. The Bolivarian philosophy named for Bolivar is a form of democratic socialism that repels perceived imperialism and rewards nationalism while promoting economic self-sufficiency of the nation as a whole.

The Bolivarian philosophy pushed by Chavez incorporates the Marxist influences gleaned from another hero and mentor of Chavez, Fidel Castro. Unlike Castro's insulated Cuba, though, Chavez has tried to push his agenda onto the regional stage and use Venezuela's oil power to give a higher profile to this brand of Latin American leftism. Chavez has gradually clamped down on freedoms within the country, though, closing media outlets, tamping down opposition movements, and nationalizing various industries.

Think of it as a traditional trade bloc that doesn't advance economic growth through the free market, but through government involvement, welfare, trade, and social reform.
The member states of ALBA are Antigua and Barbuda, Bolivia, Cuba, Dominica, Ecuador, Honduras, Nicaragua, Saint Vincent and the Grenadines, and Venezuela. Though the concept of a Bolivarian Revolution is most often associated with Chavez's plans in Venezuela, it's fair to say that Chavez's political partners in Latin America are implementing similar philosophies to one degree or anther in their home countries with the intent of bringing all of Latin America on board in a united effort.
Posted by www.blackbirdpressnews.blogspot.com at 11:01 AM